Most Read: The HF Current Probe – Theory and Application

The annual “Top Twelve Articles from 2012” was just published by Interference Technology Magazine. My article, “The HF Current Probe – Theory and Application” was the number one most read article last year! Thanks everyone! 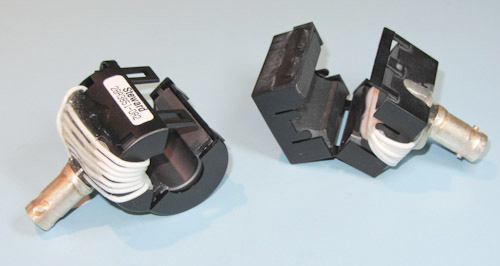 I recently received the following question on how to calibrate current probes and thought you’d be interested.

Question: Good morning.  I read your article, “HF Current Probe:  Theory and Application”, but now I have a question I’m hoping you can help me answer.  I am attempting to measure the transfer impedance of a current monitor probe using a probe calibration fixture or jig.  To keep the setup simple, I am using a signal generator and a power meter.  As in your example, I am setting the generator to source 0dBm and I will verify it with the power meter and sensor through an adapter; I will then connect the generator’s output and current probe to the calibration fixture and measure the probe’s output using the same meter and sensor.  This all works fine until the input SWR of the calibration jig reaches about 1.3 at 100MHz.  From that point up to 400MHz, the SWR of the jig reaches 3.4.  It appears that one would be measuring both the current probe’s insertion loss and the calibration jig’s mismatch loss.  Would it then be best to establish the reference by measuring the output of the signal generator while it is connected to the calibration fixture (without the probe inserted), so as to include the jig’s mismatch loss in both the reference and measurement sweeps?

Answer: You’re on the right track. You need to normalize out the effect of any mismatch from the jig setup. There are several methods for calibrating current probes. If you have the jig, that’s great. Basically, what you’re trying to do is measure the current accurately versus frequency – a not so trivial task to keep the current fixed as frequency changes. The problem is that any parasitics (R, C, L) in the wire to be measured can greatly influence the current value. That was the problem I was running into when measuring the wire in the referenced article. I tried to keep the value of current fixed by inserting a small resistor in series and measuring the voltage drop, keeping the this voltage drop steady by adjusting the RF generator output. It’s much better to use the 50-Ohm jig, but there will still be mismatch errors, which may be somewhat alleviated through the use of 6 to 10 dB attenuators. The goal is to measure the current through the probe versus the voltage at the probe terminals. Dividing the terminal voltage by the current gives you the transfer impedance. I’ve attached a few references.

Teseq also has a calibration procedure within the instructions for their test jig, and look under the “downloads” tab.

Dr. David Pommerenke, of Missouri University of Science and Technology (MST), authored a paper with Ram Chundru and Sunitha Chandra on “A New Test Setup and Method for the Calibration of Current Clamps“, which runs through the historical calibration methods and then suggests an improved method.