Recap of the 2013 EMC Symposium in Denver posted…

The annual IEEE Symposium on Electromagnetic Compatibility (EMC) was held August 5 through 9 at the Denver Convention Center. EMC engineers and EMC-related vendors from all over the world met to present the latest technical information, as well as the latest products and services.

Following the recent webinar sponsored by Rohde & Schwarz, I received way too many questions to answer during the live presentation, so I’m following up gradually and posting my answers on The EMC Blog, now hosted by EDN.com.

I just posted my third article:

I’ll be posting one more on the questions I received on general EMC topics some time in August.

In the meantime, I’ll be attending Doug Smith’s ESD/EMC three-day seminar next week and may write up a description with pictures. The week after that, I’ll be attending the annual International Symposium on EMC right here in Denver. I’ll be posting at least two articles on new products and other activities.

Presentation during the IEEE EMC Symposium

I’ve been invited to be the keynote speaker at the annual NEC EMIStream evening seminar and reception during the IEEE International Symposium on EMC, Thursday, August 8th, from 5:30 to 7:00 PM. The title of my presentation is “EMC Troubleshooting and Pre-Compliance Testing on a Budget”. For more details and to register for this free event, check out this link. http://www.nec.com/en/global/prod/emistream/ieee_seminar2013.html

I was honored to be the featured speaker at the 13th annual EMC Society Chapter of the IEEE Milwaukee Section “EMC Mini-Symposium” this last March 19th. Hosted and managed by EMC engineer Jim Blaha (GE Medical), this was actually no mini-symposium – but is the largest regional gathering of EMC engineers in the country. There were a record 180 engineers from around the area, as well as a record 42 vendors showing their wares. The event sold out within just a few weeks.

The title of my talk was a mouthful: “EMC Essentials and Pre-Compliance Testing with your own Affordable EMC Troubleshooting Tools Kit”. While I covered some of the major EMC theory for issues I generally end up addressing at various client companies, most of the day was spent on how to collect a set of useful tools, probes and measuring instruments to make up a portable EMC troubleshooting kit. I then went on to explain how I use these tools to perform pre-compliance and evaluation testing of prototype products.

I’d like to thank Jim Blaha for his superb organization and management of the event, all the vendors, who helped sponsor the event and Agilent Technologies for supplying the oscilloscope and spectrum analyzer for the demonstrations.

Here are a few pictures taken by my colleague and fellow EMC consultant, Jerry Meyerhoff. Thanks Jerry! 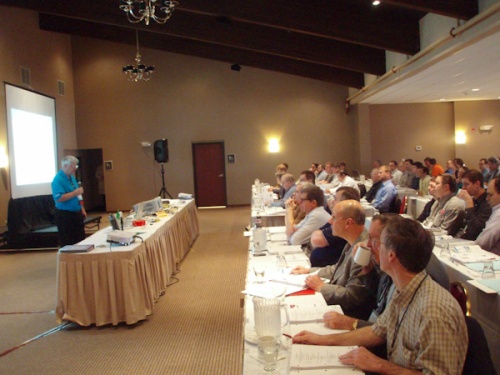 Jim Blaha from GE Medical manages the symposium and is providing introductory comments.

Chatting during one of the breaks.

A portion of the 180 attendees.

Here I am explaining why pigtail shield connections cause common-mode currents resulting in radiated emissions.

The annual International Symposium on Electromagnetic Compatibility was held in Pittsburg this year. As ever, I captured the event photographically, with the help of team members Tom Fagan, Jerry Ramie and Richard Georgarian. Although, tough at times, I also tried sitting in on several technical sessions, as well as meeting with a number of vendors. Here’s a quick synopsis, but for more detail, please check out Part 1 and Part 2 of the full report in The EMC Blog at Test & Measurement World.

The convention center in Pittsburgh is huge – so much so, that I’m sure I ended up walking a couple miles a day during the week there. Fortunately, I was able to rest occasionally in the volunteers office, which was situated near the middle of activity.

There were several new products of note. Dutch Microwave Absorber Solutions (DMAS) has introduced a high performance and environmentally friendly polystyrene microwave absorber that will cover the frequency range 30 MHz to 40 GHz. EM Software and Systems, inc., was there demoing their electromagnetics simulation software called FEKO. It’s useful for modeling antennas, radar cross-section, RFID, SAR, EMC, etc. Gauss Instruments was demoing their new wide-bandwidth (up to 162.5 MHz at a time) time domain EMI analyzer, the TDEMI 40G, which measures from 10 Hz to 40 GHz. Dudley Kay, from SCITECH Publishing, Inc., was there with a number of technical books for sale. He was also actively looking for EMC-related authors.

The convention center offered a nice aerial view of the vendor area.

As far as the technical sessions, Henry Ott again moderated the popular EMC Basics workshop on Monday, which was very well attended. I was also a part of a half-day workshop, “EMC Consultant’s Toolkit”, which was the best-attended session on Friday. We covered lots of business aspects and pitfalls of working as an independent consultants, providing the attendees with a host of knowledge to consider. I also included a short presentation on low-cost tools and equipment when you’re just starting out. We wrapped up with a panel discussion shown below.

The hardware experiments are always a popular event and this year was no exception, as we had several excellent presenters. One of my favorites is Dr. Tom Van Doren, who gave a couple demos; one on cable shielding and one on magnetic (low-frequency) shielding materials. I presented a new one on the effect of a high-frequency trace over a split return plane and showed how the result generated high levels of common-mode harmonics in attached cables. 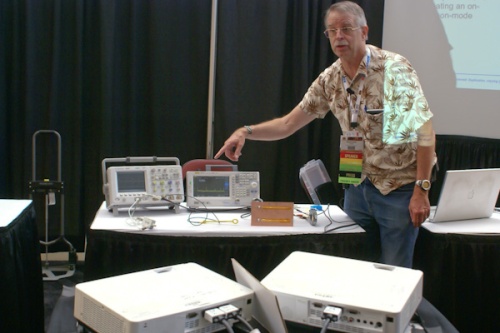 Here I am demonstrating common-mode emissions generated by a high frequency trace over a gap in the return plane. Photo by Richard Georgarian.

The youth program was run by Amy Pinchuk this year and sixteen kids got to build shortwave receiver kits, as well as hear about ham radio from ARRL RFI expert, Ed Hare, along with a presentation on mobile electronic devices and why EMC is important for proper operation, by ETS-Lindgren engineer, Garth D’Abreu. They also had a nice tour of the vendor area.

After-hours social events scheduled included a really cool welcome reception at the nearby John Heinz History Center. Heinz was an avid collector of early memorabilia from Western Pennsylvania and Pittsburgh, in particular. The Wednesday Gala was a dinner cruise along the rivers bordering Pittsburgh.

I guess that’s a wrap until next year, where it will be held in Denver, August 5-9, 2013. For more info, click here. Hope to see you all next year.